Editor’s Note: Anastasia Chernykh, the social media manager for this blog, recently returned from a weekend getaway to Vilnius, Lithuania. Her photographs made me curious to know more about this Baltic capital. I asked her to write this guest post about this gorgeous European city.- Jen 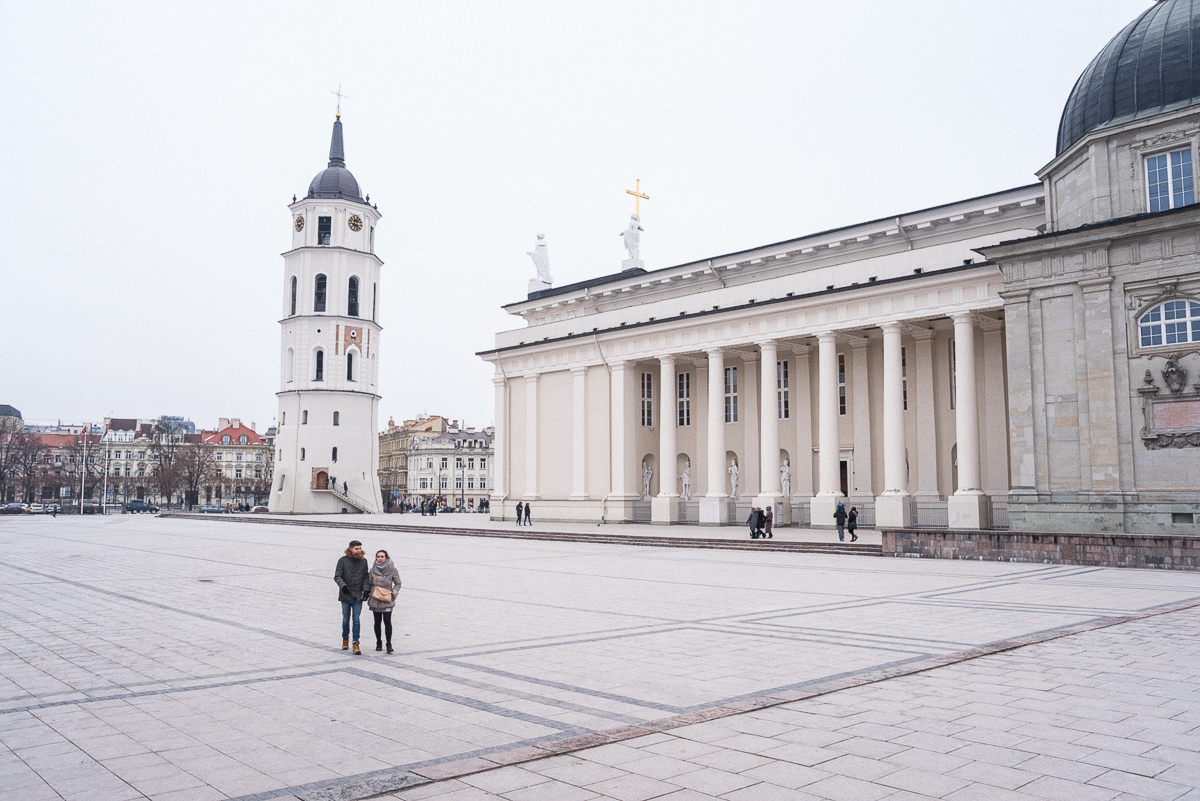 The Cathedral Square in Vilnius

Normally when people hear the words “winter getaway” they imagine some place warm, sunny, with white sand under your feet and calm ocean breeze touching your cheek in the morning. But for some of us travelers, winter is the best time to go North. You see, most of the countries here in Europe show their true character only in winter. This time I went to Vilnius, to see, to eat and to freeze 🙂 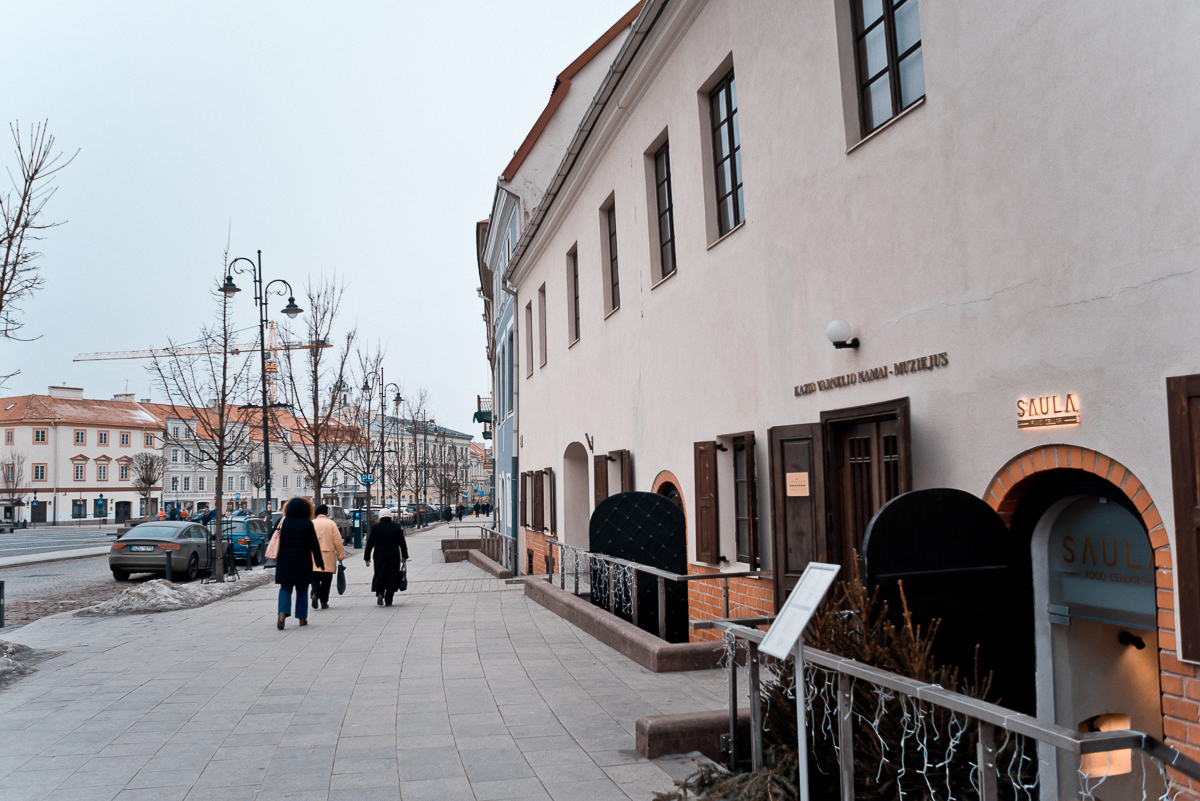 Lithuania is a young country with an old history. It regained independence in 1990, but the history of Lithuanian kings go back to the 13th century, and once was one of the largest countries in Europe. It included present-day Belarus, Ukraine, and parts of Poland and Russia. The best way to see and touch that history is to explore the Old Town of Vilnius, one of the largest medieval sites in Europe. Let’s start the walk! 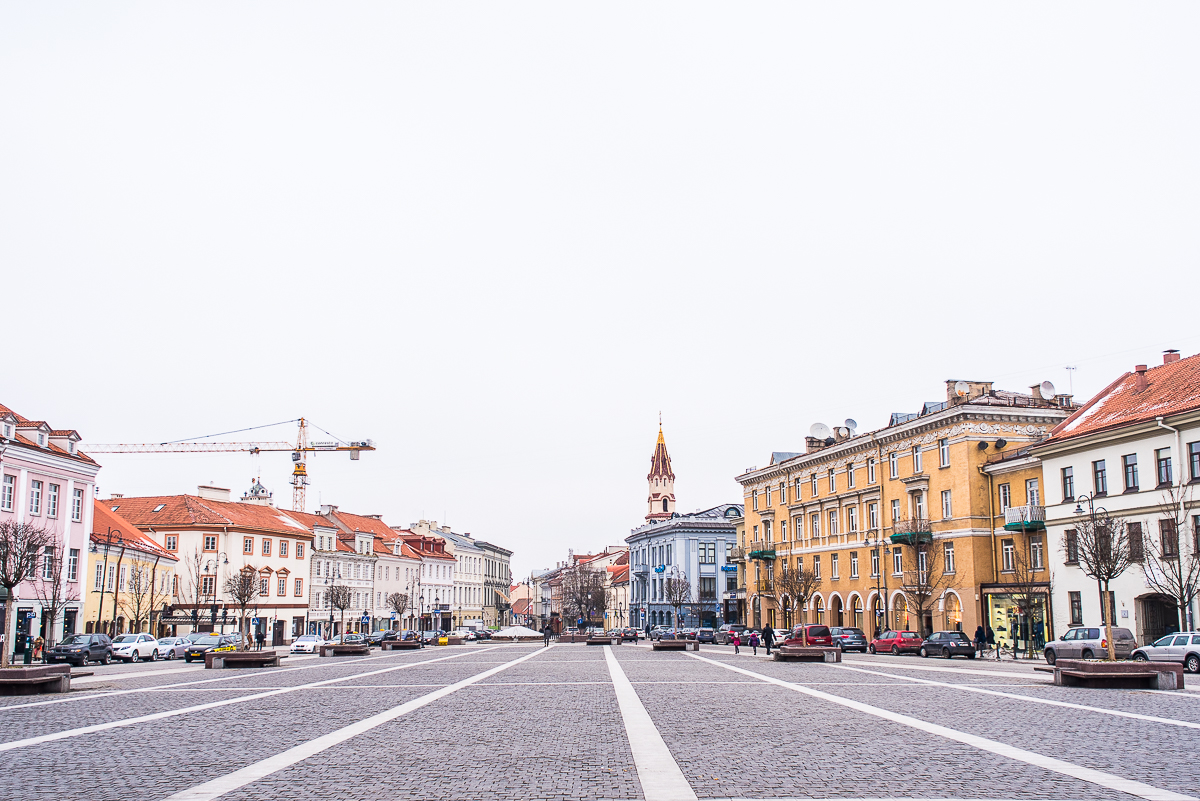 A view from the steps of Town Hall

Cathedral square is the heart of the city, and also a good point to start a walk through the Old City. It looked completely white on a cold winter day, and I loved minimalistic neoclassical architecture of  Cathedral. Don’t miss checking it out inside – the place looks  like a museum with more than forty frescoes and paintings from the 16th through 19th centuries on it’s walls. Here’s an interesting factoid-  it is believed the pagan temple was located at the same place long before the white walls and liturgies. 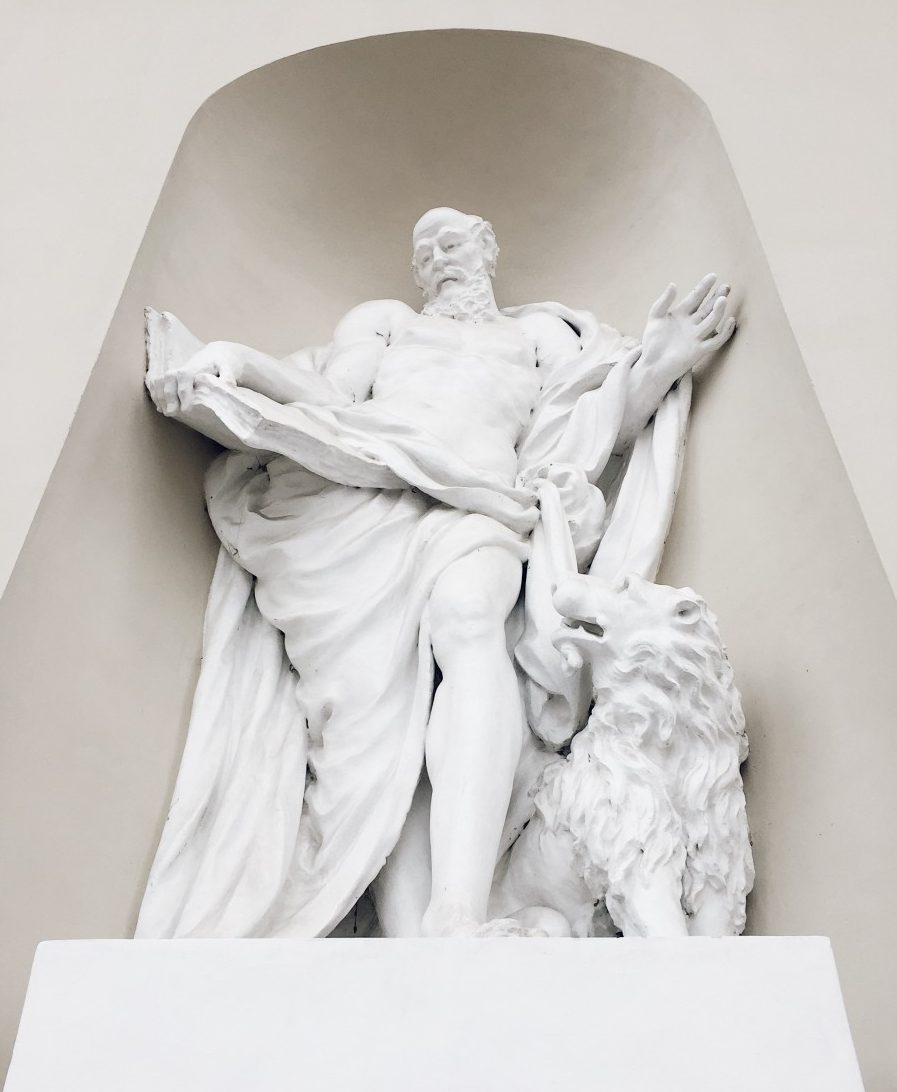 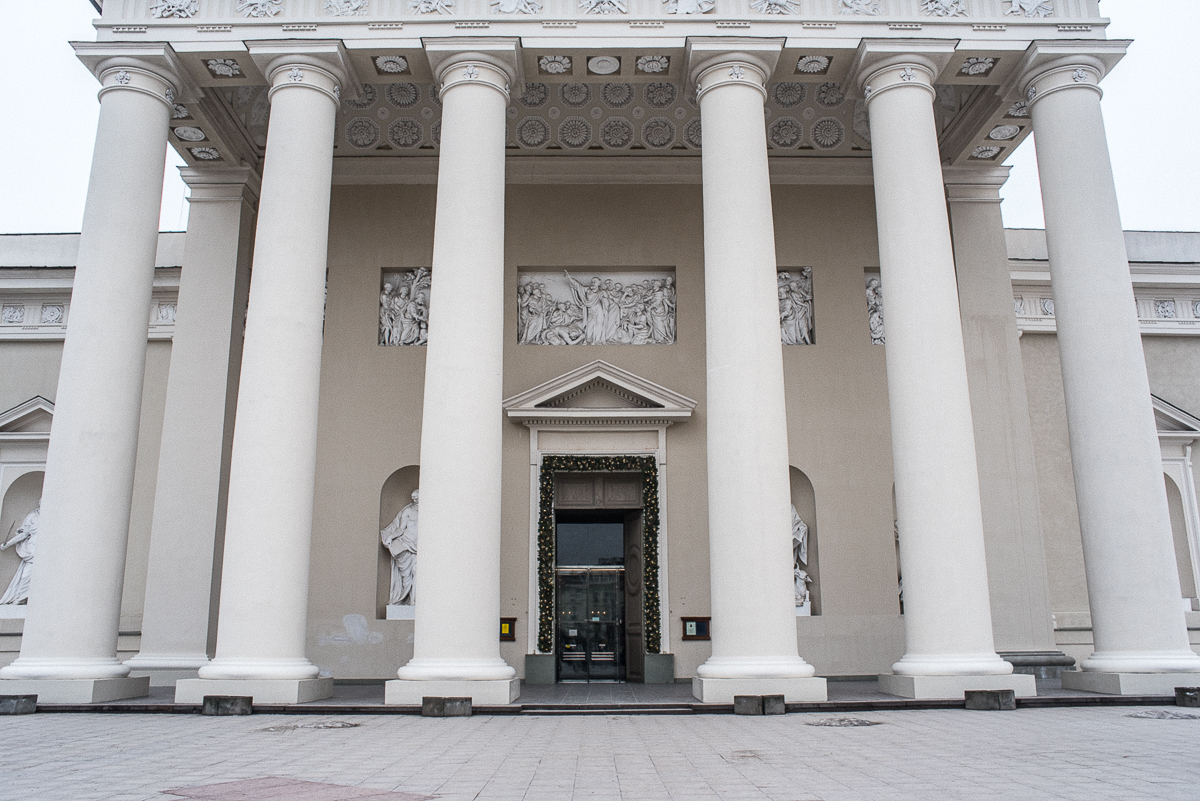 Facade of the Vilnius Cathedral 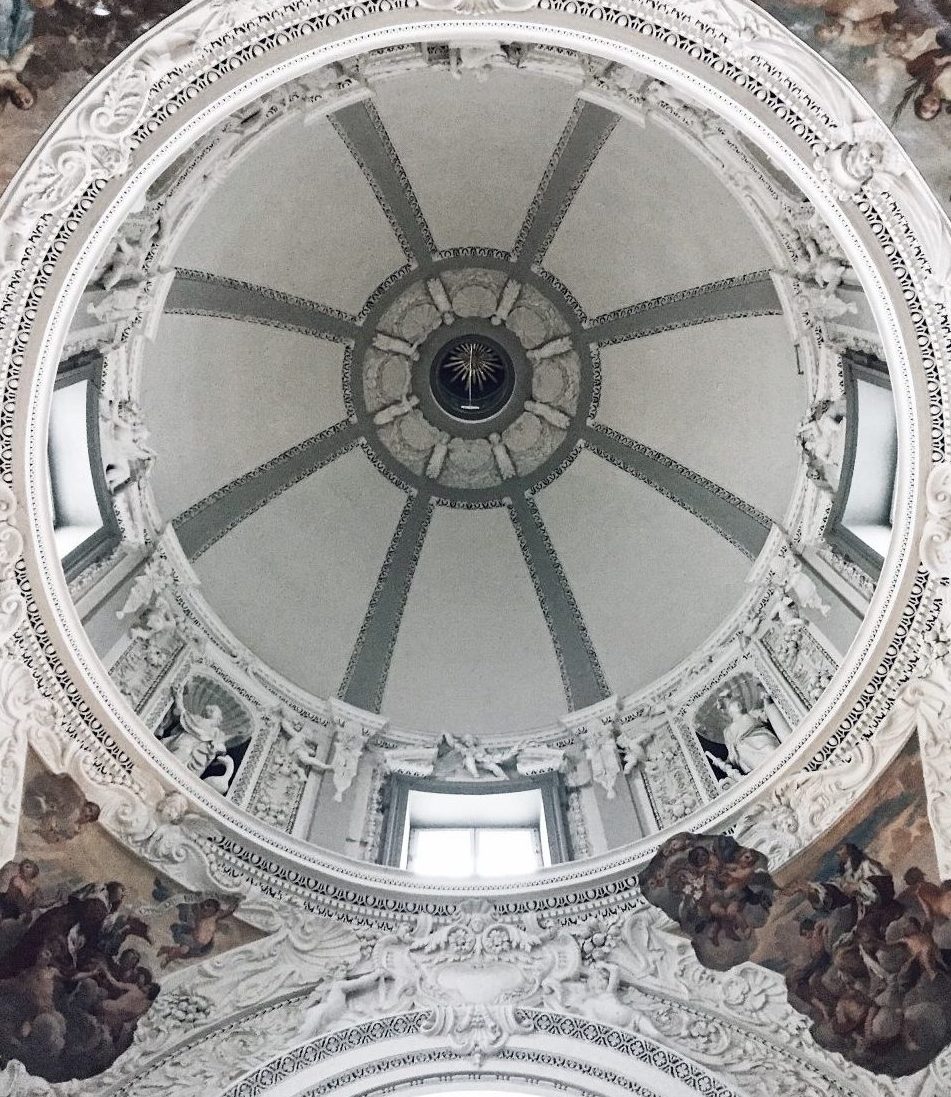 Gediminas’ Hill and the Tower located right near the cathedral. The way on top looks harder that it is (tip, you can use a funicular!), and the tower itself despite looking very old was actually rebuilt in 1930. The origin legend of the tower (and the city) is rather fascinating.

The story goes that Lithuanian Grand Duke Gediminas was hunting in the woods, and spent the night on the hill. He dreamt about a large iron wolf howling loudly. He went to magician for explanation of his dream, and was told that this was an omen telling the Duke to build a city in this place, which would become the capital of Lithuania. So Gediminas built the city named Vilnius after the nearby river Vilnia, and a castle in the center of it. 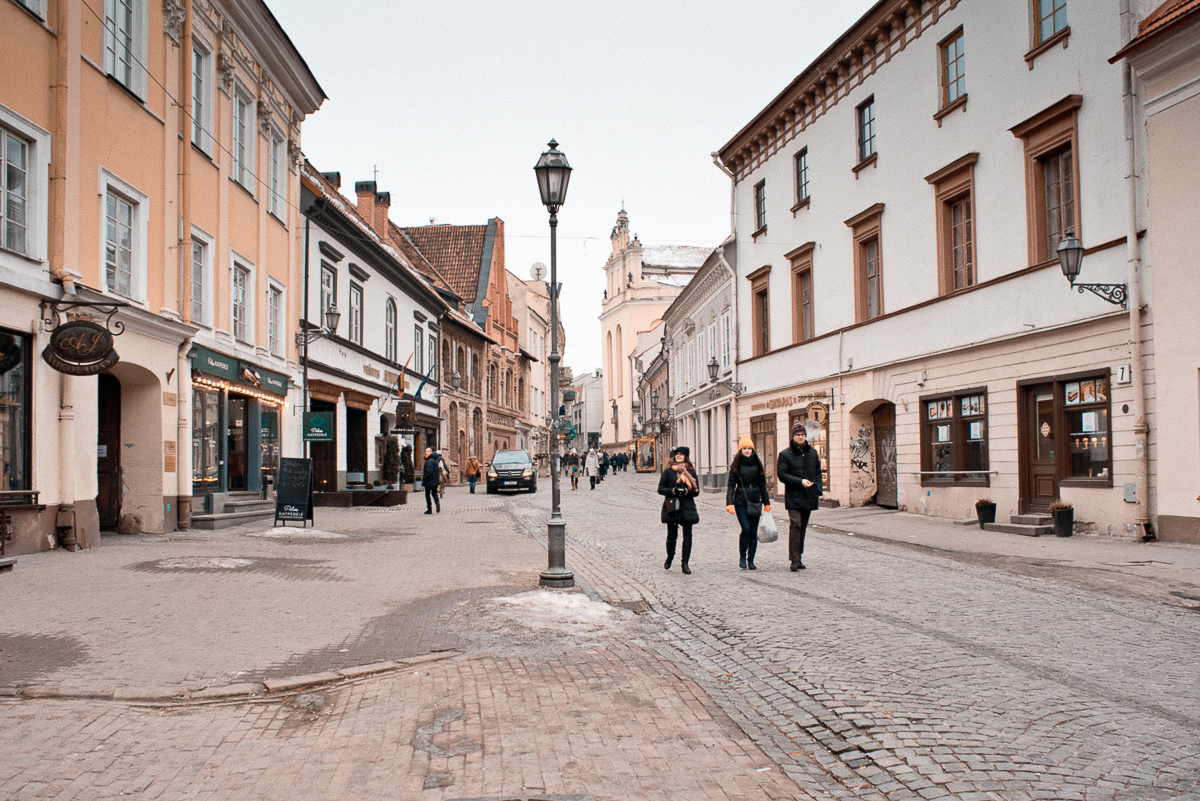 A walk through the Old City

The second you get to an old city you also notice another thing – Vilnius is a city of churches. There are 28 churches in Vilnius Old Town (21 are Roman Catholic and 4 are Russian Orthodox) with their spikes and crosses popping up all around. 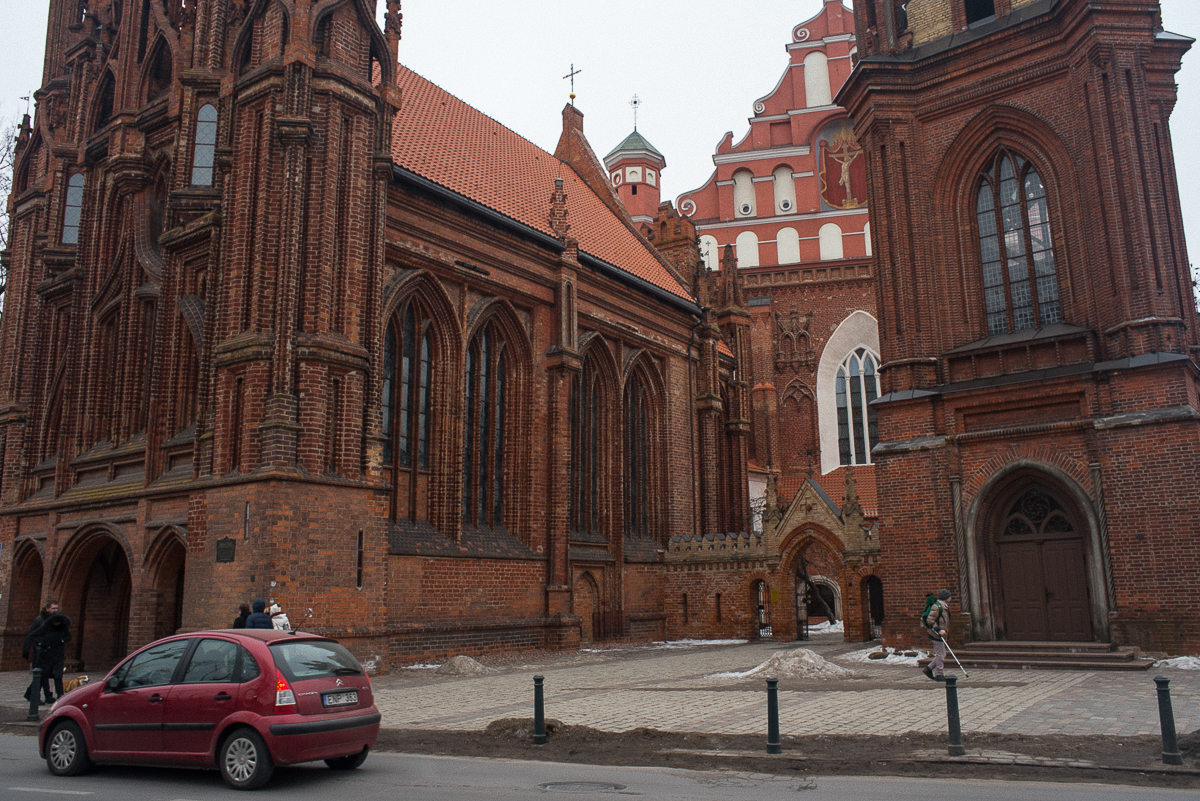 Aside from Cathedral, one of the most exquisite and elegant catholic churches is a red-brick St Anne’s Church (paired with the larger St Bernardine’s Church) to the east of Pilies gatvė.

To get up close with Orthodox Christianity, you can visit St. Nicolas church (one of the oldest Eastern Orthodox churches in Vilnius) built in Neo-Byzantine style.

South of the Pilies street is the quirky Užupis neighbourhood, also called Republic. The name Užupis means “the other side of the river”, it is separated from the Old Town by the Vilnia River, and on the second side there are steep hills. The place was a home to an artistic crowd for quite a long time (as the rent was much cheaper) and on April Fool’s Day in 1997, the city’s bohemian quarter declared itself an independent Republic. Užupis holds feasts, fireworks shows and open-air art exhibitions. 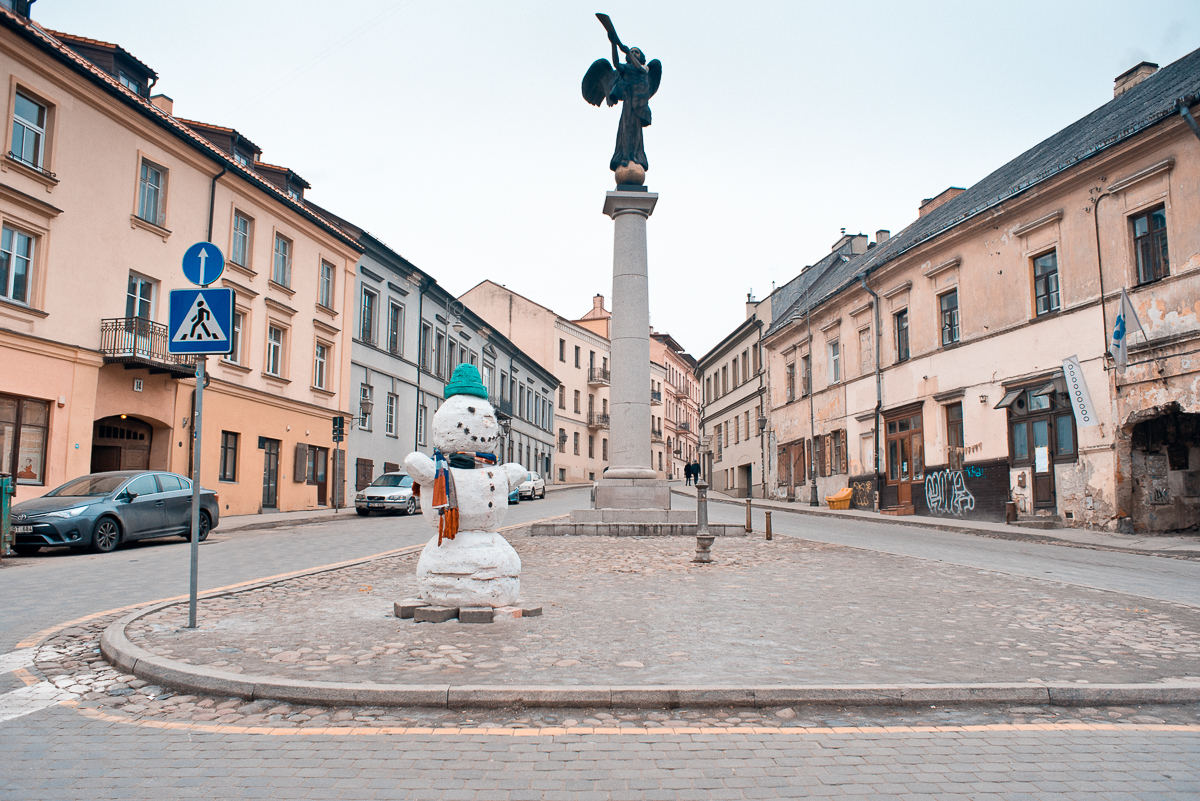 Funky inhabitant of The Republic of Užupis

It even has it’s own constitution, which includes such rights as:

Everyone has the right to love and take care of a cat.

Everyone has the right to cry.

A dog has the right to be a dog.

The constitution is written in 23 languages and can be found on a wall on Paupio street in the area. 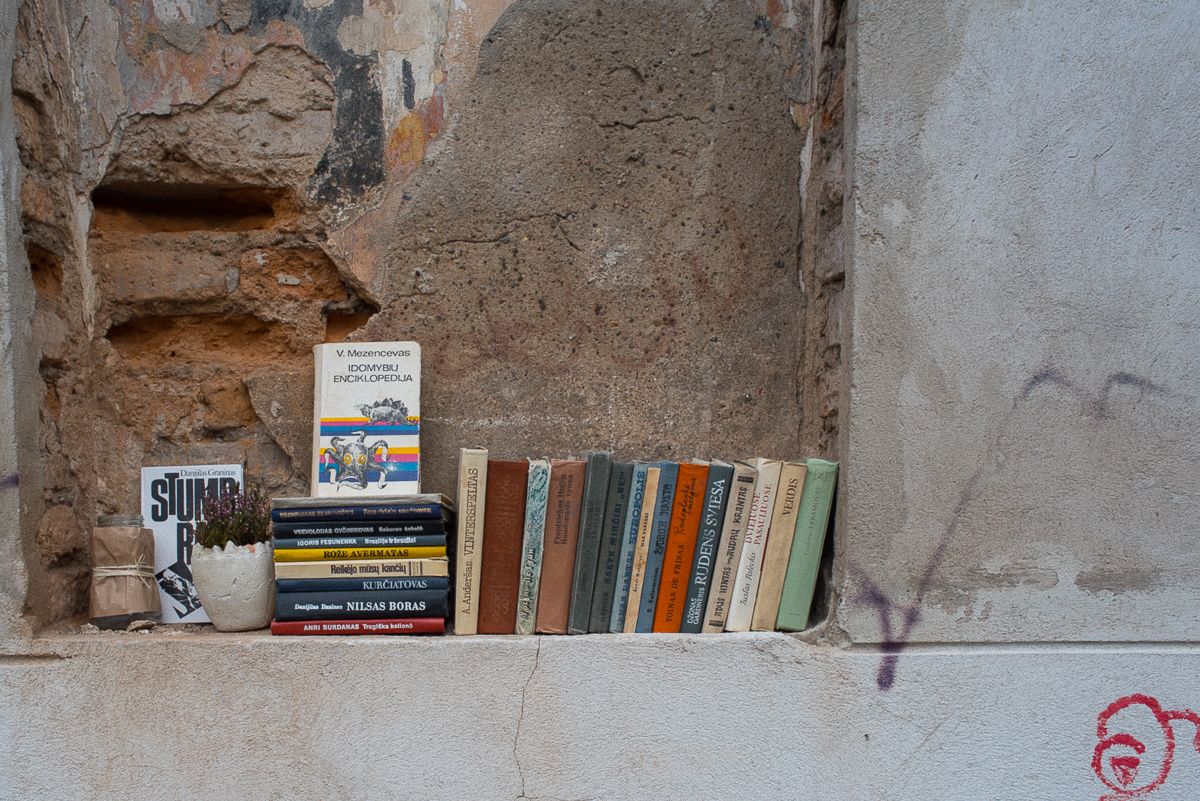 Vilnius is small, so the best way to explore it is on your foot. Unfortunately, winter wasn’t the best time for walking,  so I didn’t get to see it all. But I promise to go back in summer, everybody says the city is completely green and the weather is very lovely.

Sightseeing is a good thing, but may require some additional calories, so here is the list of some useful places to stop by and fuel up:

To kick-start the long day of walking, go for a coffee and quick bite to Taste Map Coffee Roasters or Kavos Era. The coffee is simply great! 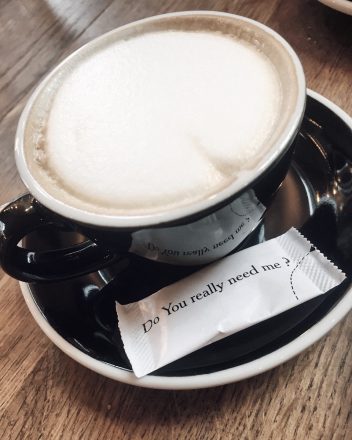 For a nice modern European lunch stop by Comfort Hotel LT, and check out the best hotel restaurant in Lithuania – Time Restaurant. It was started by Egidijus Lapinskas, rated as one of the best chefs in Lithuania, and sommelier Arminas Darasevcicius. They serve new seasonal lunch and dinner menus every day and the food is delicious. Make sure to score reservation ahead, the place is always busy. 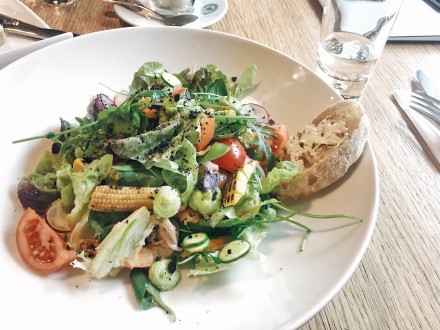 To check out the local specialty visit Forto Dvaras, located in the heart of an Old City(zeppelins are weird and interesting, but don’t try to order more than one per person, too fulfilling!), and for late night dinner Bukowski Baras is the place to be. Hip interior, mixed crowd of locals and tourist plus tastiest hot-dogs in town and craft beer!

How to get there:

The most convenient way to get to Vilnius is by plane. Vilnius International Airport is only 4 miles away from the city center, and has flights from New York, London, and major European cities including Paris, Rome, Moscow, Vienna, Istanbul, Copenhagen, Frankfurt, Oslo, Stockholm, Barcelona, Riga, Tallinn, Minsk, and Brussels.