Summer weddings seem to be popular around the globe. I found this to be true in Ukraine, too, during my recent visit. 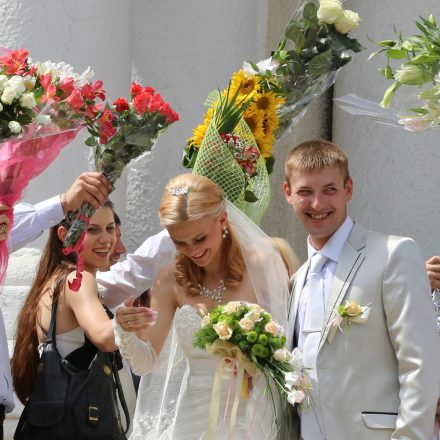 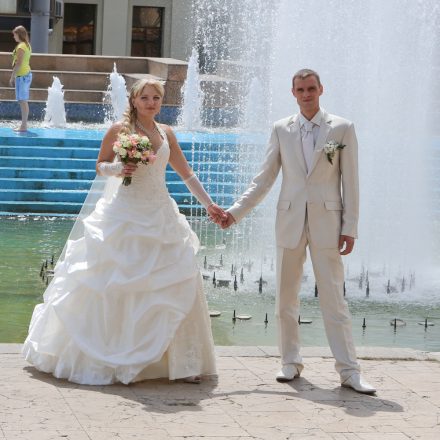 Ukrainian couples on their Wedding day

While having breakfast at my hotel in Kharkov, I overheard a conversation between the translator of a Love Bureau (or dating agency) and an awkward American man in his mid-50s. I hope the translator wasn’t translating every word, because the American fellow was trying hard – and failing- to impress a gorgeous but bored 22 year old Ukrainian girl he hoped to make his mail order bride.

The beauty of Ukrainian women has a high reputation. This is the country that is the birthplace of Ted actress Mila Kunis, as well as model/actress Milla Jovovich. It’s no shocker that many men who are unlikely in love and go the Mail Order Bride route head to the Ukraine.

While I doubt that the couple I saw at breakfast will have a story that ends happily, it’s summer and love is in the air! Summer means weddings.

If you visit the Ukraine in the summer, over a Friday or Saturday (the days that most Ukrainian couples choose to get married) you’re going to stumble upon some newlyweds and wedding parties in the parks and streets.

My assistant, Anastasia, who is based in Kharkov, took me around to the parks and Wedding Palace and taught me about some Ukrainian wedding traditions. 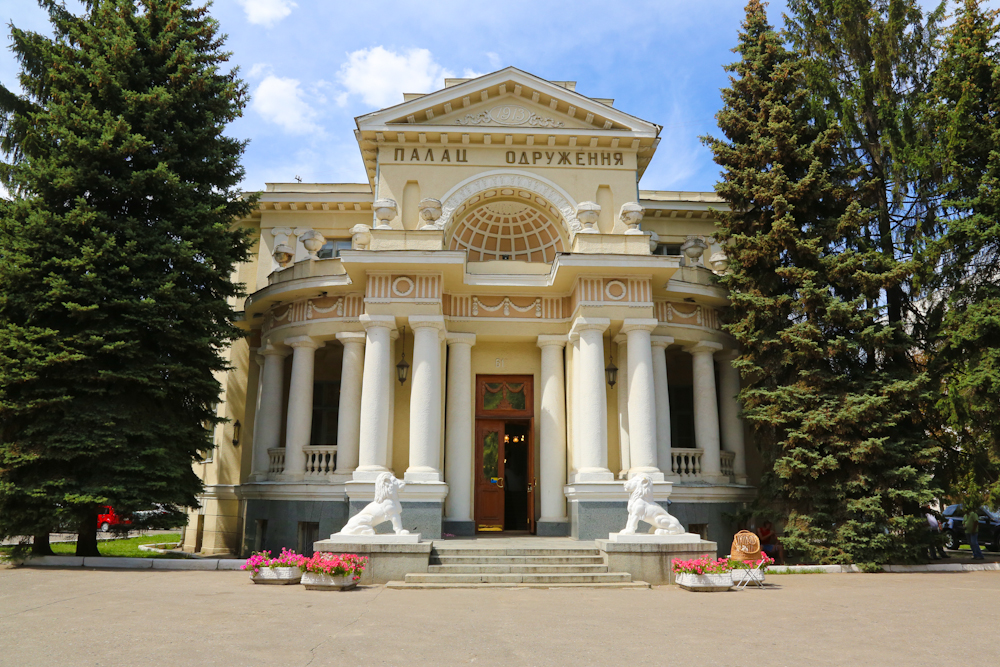 According to Anastasia, the wedding ceremony begins 30-40 days before the wedding itself. The groom, his parents and friends must ask the bride’s parents for her hand. Usually, her father gives an answer, after asking his daughter about her decision. If the bride wishes to take this guy as her future husband, parents discuss the time and place of the wedding party. But…if the woman does not wish to marry the guy, she gives him a pumpkin.

On the wedding day bride’s friends have to stay with her since early morning. They put a gown on her, make a hair-do and put on a bridal veil. The bridegroom comes to his bride in a car decorated with flowers, ribbons and balloons. From Soviet past comes the tradition of wearing a sash, which is supposed to help everybody recognize the bridesmaid, the best man and the groom. 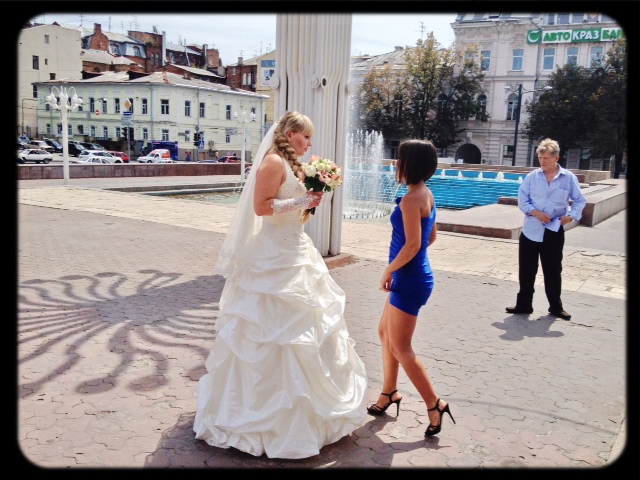 Bridesmaid to the Rescue! 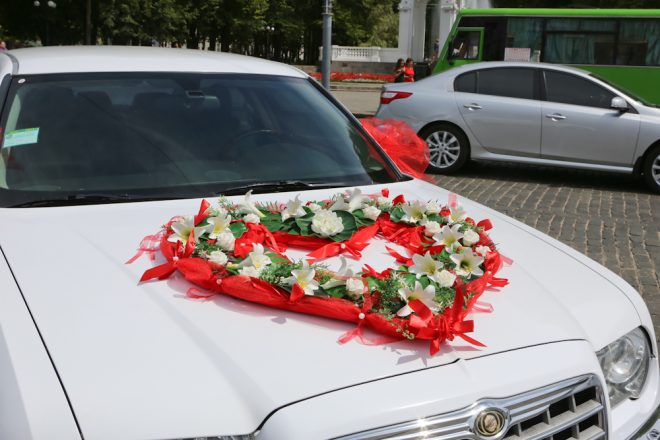 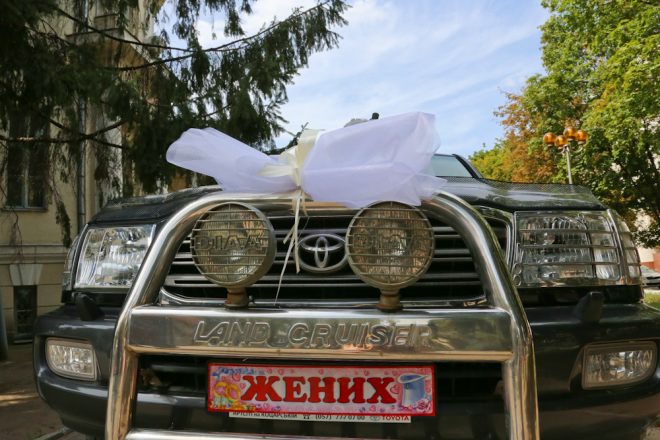 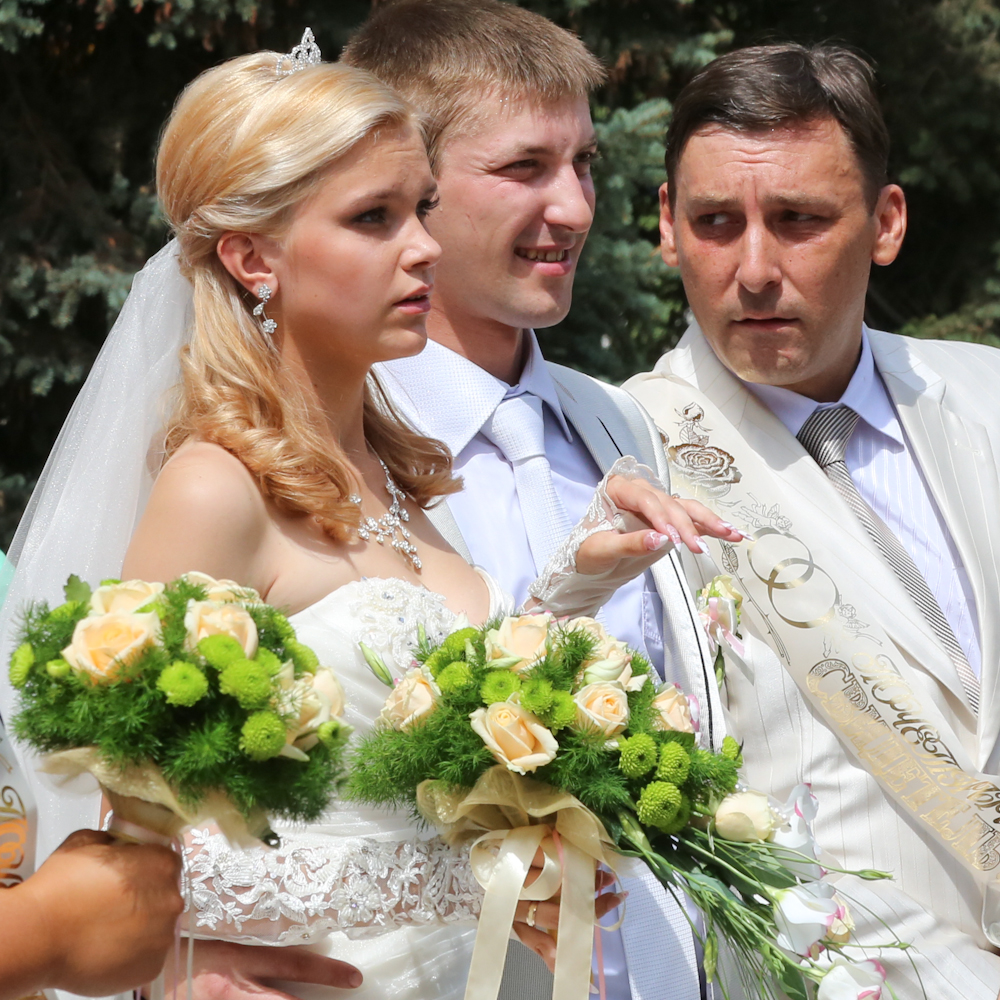 When the bridegroom and bride walk out of the bride’s house, the bride’s mother throws seeds (symbol of well-being), rose petals (symbol of prosperity and health) and coins (symbol of financial stability in a family) onto their heads.

Most couples get married at the Registry office, or Wedding Palace – it is rare to have a big wedding in a church. After the ceremony, the brand new spouses receive congratulations from friends and relatives. Then it’s time for the newly married couple to have their photographs taken. 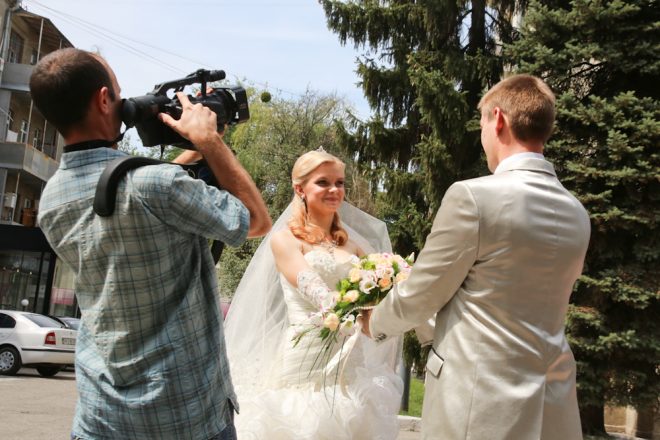 Newlywed Couple with the Videographer 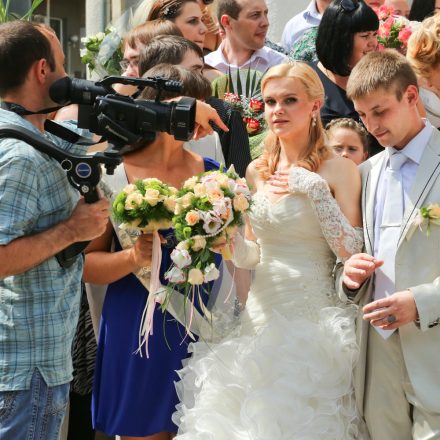 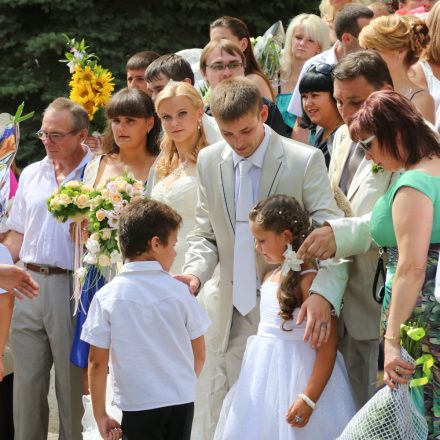 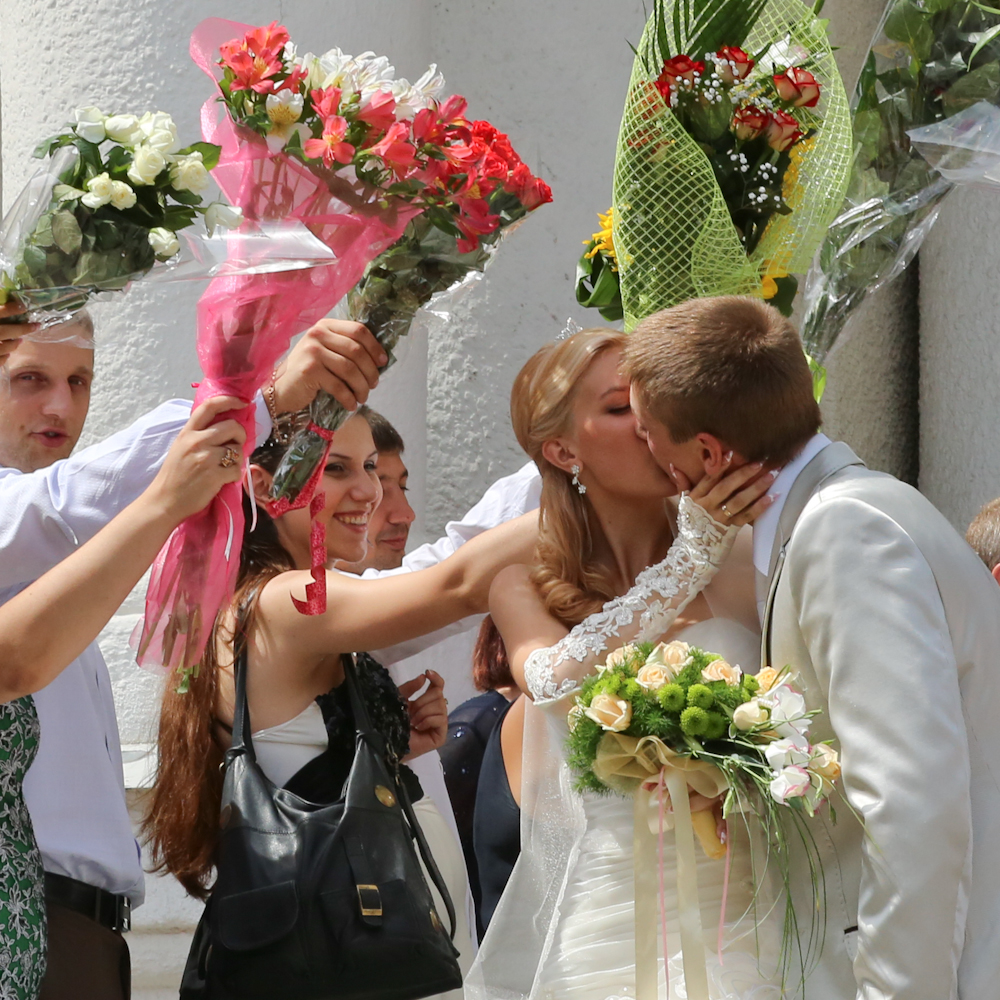 The wedding celebration the guests shout “Gorko! Gorko! Gorko!” which translates as bitter, but in this context it means everyone wants to see the couple kiss. Kissing should continue until the chanting dies down, but the bride and groom should be ready to kiss at any moment. 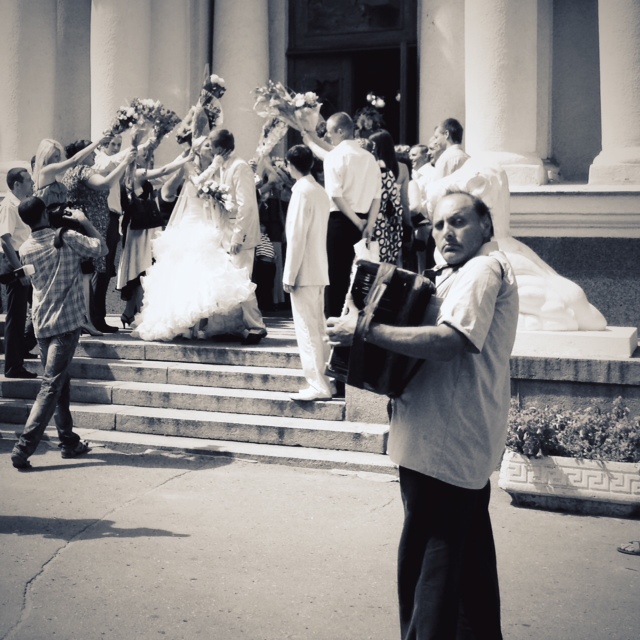 The Accordion Player & the kiss

At some point during the proceedings, the bride will inevitably be ‘stolen’ by the guests. The groom will be asked to pay for her shoes, and a much larger sum for the bride herself. An additional part of this tradition is the drinking of champagne from the bride’s elegant high heeled shoes, which usually takes place when the shoes are returned. Alternatively, instead of simply paying a ransom the groom’s Best Man may well be asked to perform a series of suggestive or embarrassing acts in order to win back the stolen bride.

One of the newest traditions in Ukraine is releasing doves. For many cultures white doves released at a wedding signifies, love, unity, and fidelity. 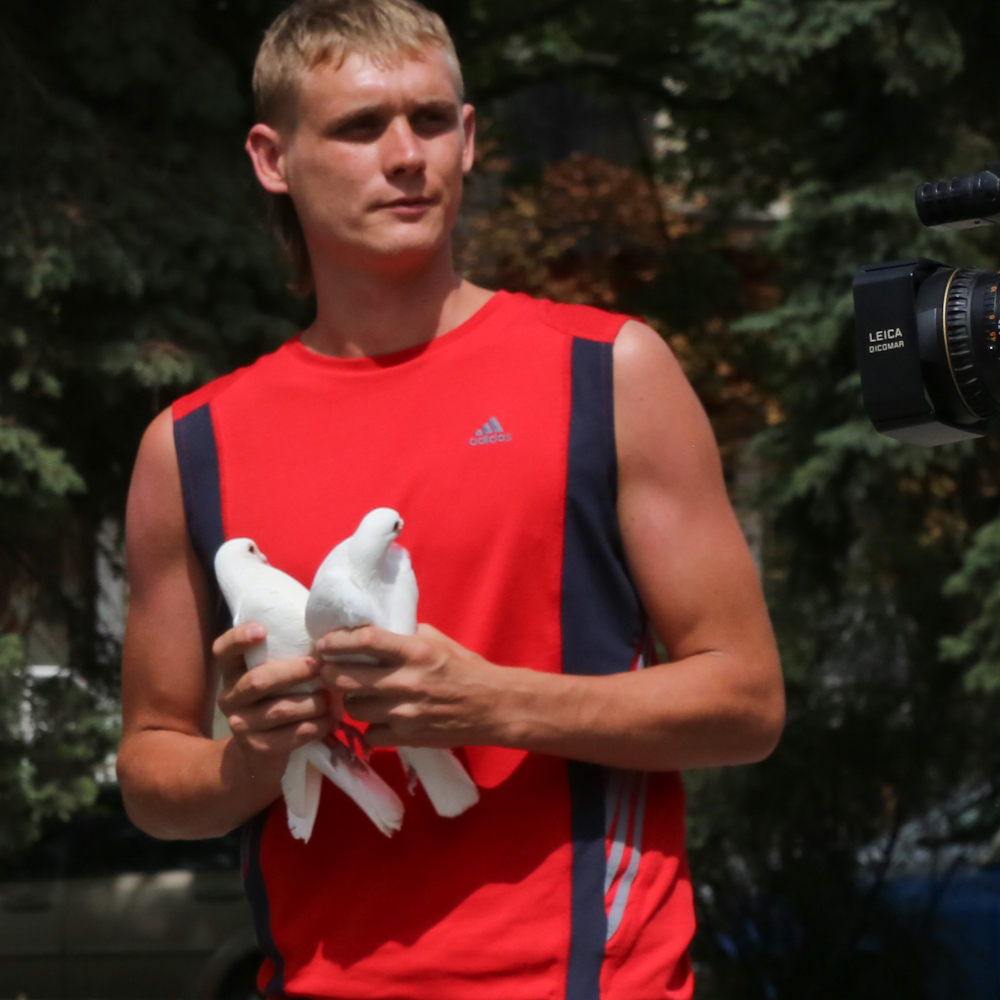 When doves cry! This doesn’t seem like the best way to hold the peaceful birds, but it’s a job! 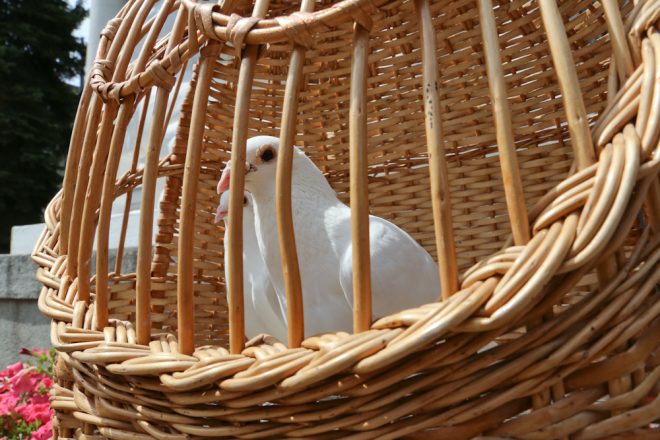 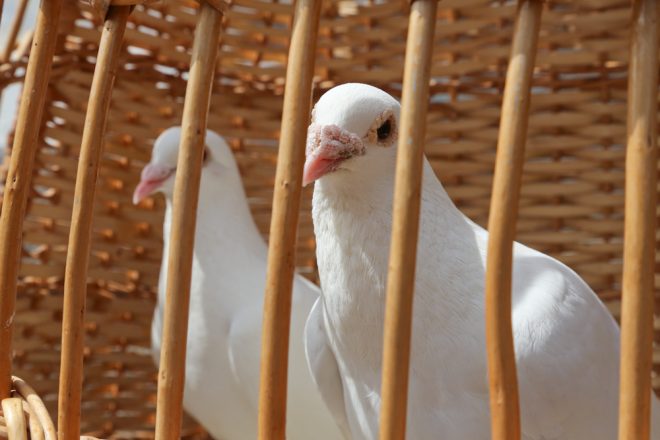 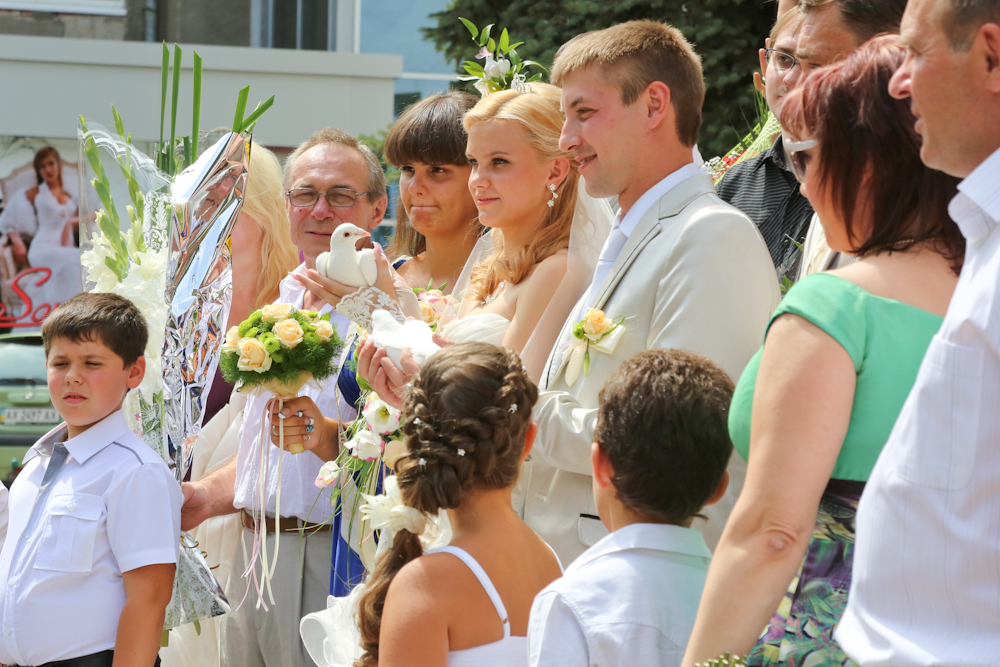 The couple prepares to release doves

Beautiful Summer Brides of the Ukraine, and Ukrainian Wedding Traditions

A Glimpse Inside The Ukrainian National Chernobyl Museum in Kiev